Birds at the beach

The crows stride as they seek interesting titbits amongst the seaweed.  The skitter and stop, skitter and stop is the oystercatcher, and those daft herring gulls sitting at the edge of the retreating shore, jumping up to avoid the swell of the breaking waves: bob, leap, take-off, settle, bob, leap, take-off.  Sudden tiny movements draw the eye to a robin picking and mixing, and a sudden mob of perhaps hedge sparrows arrives, twitters, and leaves.  The curlews I could only hear, not see - evocative sound. Never a dull moment on an afternoon when sun, rain, wind, and threatening snow all pass as I watch the life around me.  The little cove is at Rockcliffe, almost empty in this off season - empty of humans and cars, but teeming with other life. There are so many shells right up near the land edge of the beach, masses whole and mounds more in tiny bits, not yet ground to fine particles.  And then sand, a sudden line of division, both surfaces strewn with seaweed. 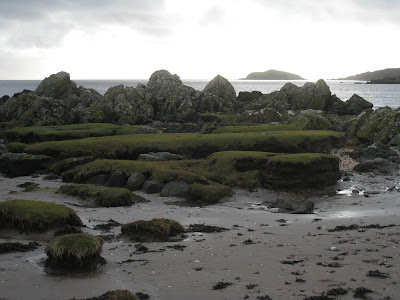 The tide going out reveals delightful stands of grass on plinths of sand and earth among the rocks.  Good hunting grounds all round for those who seek.
Further out of the Urr estuary, in the Solway Firth, there is Hestan Island with its Alan Stevenson lighthouse, and definitely non pc named feature of Daft Ann's Steps. The timing of my cold is somewhat unfortunate as we had decided to take a week off in Scotland.  Luckily I am much improved - only the persistent cough is making sleep difficult. 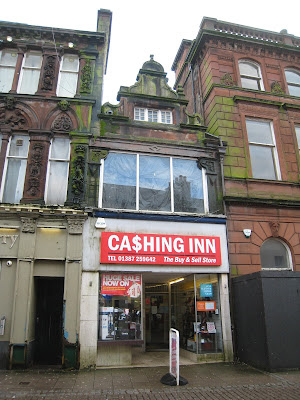 Today we were in Dumfries which has a mixture of elaborate decoration and decay in many buildings.  I do love the red sandstone which was a favourite with so many Victorian builders.  Robert Burns is a great favourite here, with signs, paintings, and statues, museums, .... 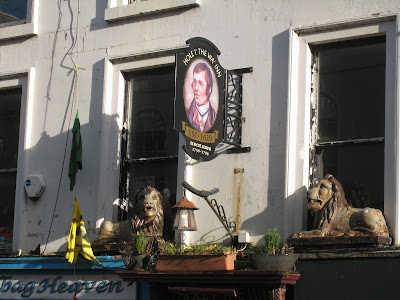 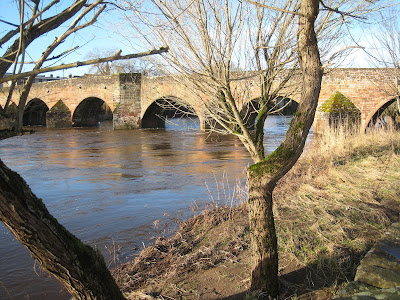 The River Nith runs through Dumfries, and is running high and fast at present, but not flooding.  The additional astonishing sight was the number of ducks paddling like mad to stay still while the water sped past.  There must be rich pickings indeed to expend all that effort.  I was unable to photograph them as first they were across the river from me, and also the sun was in my eyes. 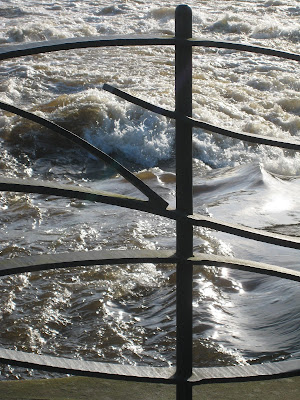 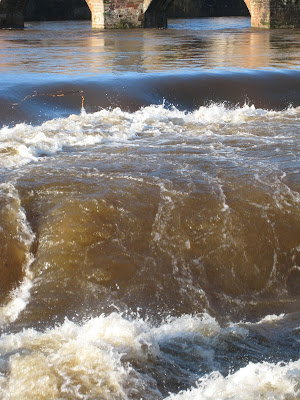 It was a gloriously sunny day today, with only a couple of short showers, bringing rainbows.  There is scant snow on the tops of hills, and the air is so fresh, feeling especially good because I can breathe easy.  We enjoyed the views of the Nith estuary and were delighted in a nature reserve there to catch a couple of brief sights of an eagle being mobbed by rooks.  Far too fleeting a glimpse to photograph. 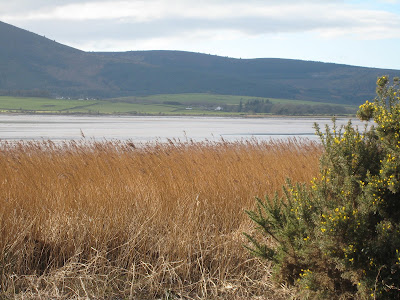 My current whodunnit reading is Five Red Herrings by Dorothy L. Sayers, a Lord Peter Wimsey adventure which unaccountably I have not previously read.  I chose it deliberately as it is set in Dumfries and Galloway - at a time when the railways still ran.  Now there are only many beautiful viaducts which decorate the landscape.
Posted by Olga Norris at 7:49 pm No comments: 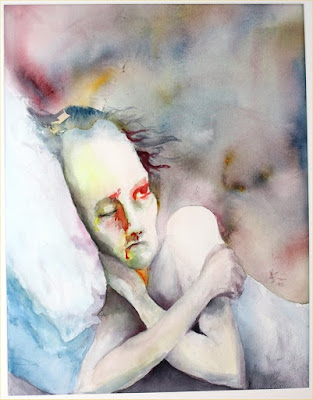 Anne Carrigan: Head Cold
I came away from the workshop last week with food for thought - and a head cold!  So now I am indulging myself on the sofa: whodunnits, hot milk, soups, and lots of tissues.
Normal service will resume as soon as possible, I hope.  At least the image above (from here) makes me feel much better in comparison.
Posted by Olga Norris at 9:56 am 6 comments:

Back to the 3D thing

This week I went on a two day workshop on sculptural textiles with Debbie Lyddon at InStitches.  I have been following Debbie Lyddon's blog for some time and am intrigued by and attracted to her work and her methods.  When the opportunity arose to attend a workshop close to where I live - well, it would have been daft not to try it out.  Especially as I have this longterm background itch about doing something 3D-ish. 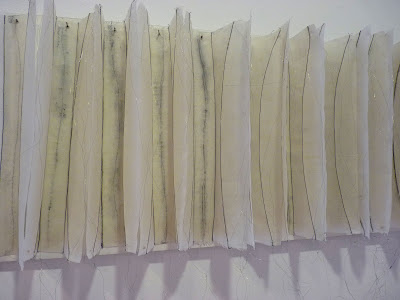 Debbie Lyddon: Auricle (detail) image from here
The two days worked really well.  The venue is great - a good space, well equipped, friendly, and generous folks.  The other participants provided such a broad range of input, and fun.  And Debbie herself is a great instructor, provider, and facilitator - as well as being great fun.  Obviously I had a great time! 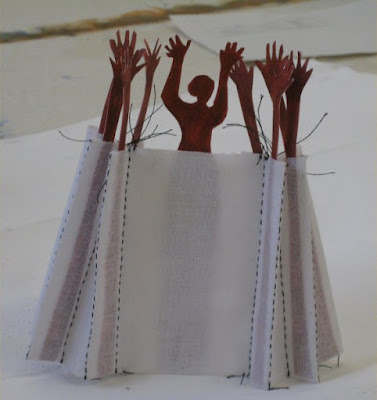 But it was a productive time too.  I think that maybe this time I have come closer to what might suit my needs.  On this workshop I actually made a more or less complete piece of work.  Usually my intention is to make samples to remind me of techniques, but this time I was moved to try to marry one technique - stiffened pleats - with some element which would make the piece mine. 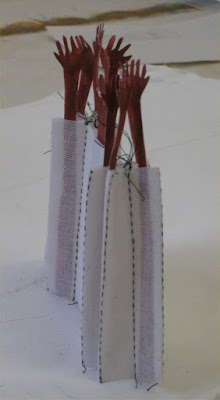 Wax as a surface, a material, an idea has long held an allure for me, reinforced by an excellent Experimental Batik on Paper workshop I attended some ten years ago or so at West Dean with Hetty van Boekhout (the course is on this year too).  It was the wax element of the Debbie Lyddon workshop that was initially what interested me the most.  And the sample I made for myself has ignited even more enthusiasm. 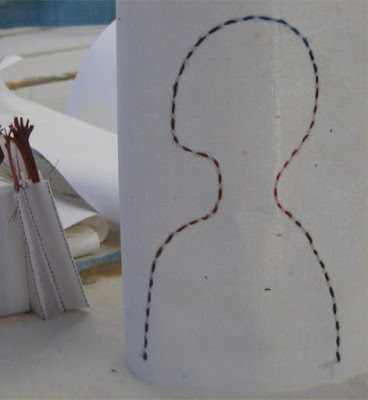 A piece of muslin was stiffened overnight with a coat of emulsion paint.  On that I stitched (using an awl to make the holes before threading the needle through) quite a thick slippery, disobedient but scrummilly beautiful space dyed thread round an outline.  Ironing wax all over this gave a fabulous feel to an even stiffer cloth, flattened the thread into the fabric, filled out the awl holes, ... gave me something very exciting.
So much to bubble away on my back burner now!  Even though I did say a couple of posts ago that I enjoy thinking, I do also enjoy trying things out.  As Andreas Gursky the photographer said in the Guardian newspaper yesterday: 'As I'm always telling my students: you won't get anywhere sitting at a table thinking.  You learn by doing.  And even if you do something wrong, the result may be much more interesting than what you went looking for.'
Posted by Olga Norris at 2:01 pm 7 comments:

Looking back and forward 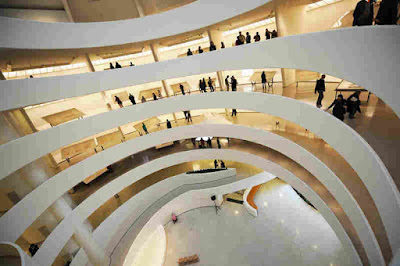 (image above from here)
I visited the Guggenheim Museum in New York in 1982 to see a Kandinsky exhibition.  But it was the architecture of the museum which struck a deep chord.  I was with a friend, going round the show at different speeds, and it was looking down to see where she was that it suddenly struck me: this building is a metaphor for life.  I was looking back at where I had been; even my friend was part of my past: she was a colleague from my previous job.

It was even clear that as one progresses, the perspective looking back changes.  Not everything can be seen clearly.  Recently, presently, I have been using the spiral to look back.  For instance, in trying to clarify how to move on with my work, I am first looking back at what I have done to get here in my work blog. 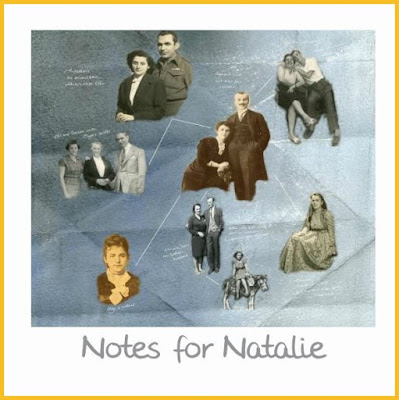 Last year I interrupted my flow of work to look back in a different way.  I had reached a point where there are now memories that only I have, and I have photographs of people who are now only known to me, so I decided to put together a book for my great niece explaining who all these folks are, their characters, and how they are related to each other and to her.  I also included anecdotes, some of which were illustrated by the photographs.
A book of photos with text is so much easier to dip into than a box full of snaps - or even a photo album.  So much more than simple, or even lengthy captions can be put into the text of a book.   Photobox was having a sale last autumn, so I took the opportunity.
I so regret not asking more questions of all my relations when I was young, especially as both my grandmothers' generation had lived through so much history - the wars, the migrations, etc., and so many changes.  I wanted to do a little bit to pass on my own memories of individuals and incidents, so that perhaps the youngsters would be prompted to ask me further questions while I am still around and capable of answering! Angie Lewin
Reading Debbie Lyddon's blog post about her recent work with seaweed, my mind wandered to other views and uses of seaweed.  The most usual can be seen in the delicate watercolours of Angie Lewin. 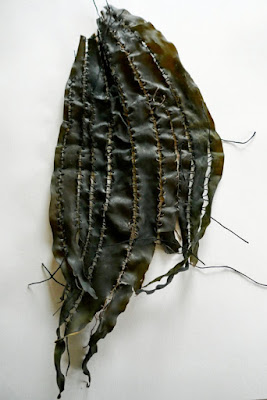 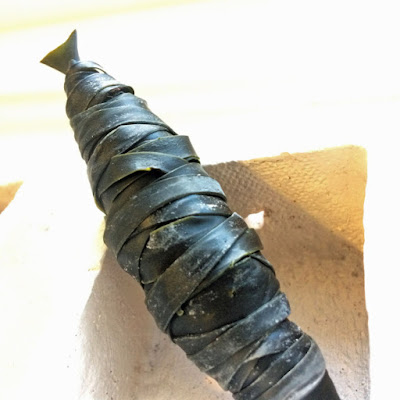 Debbie Lyddon has used the seaweed itself to stitch and to wrap. 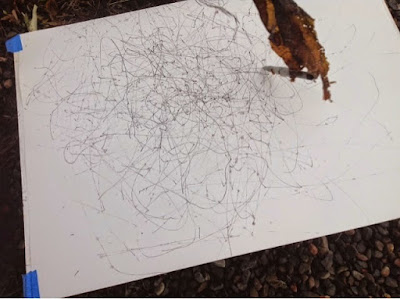 And I remembered the intriguing and magical work of Sue Corr which both Margaret Cooter and I wrote about in 2014. 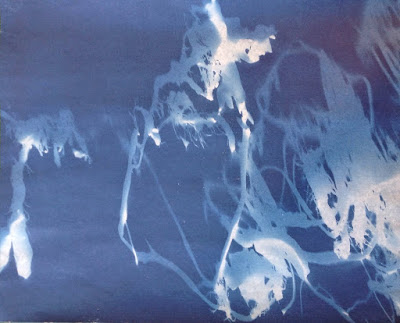 There is a different aspect of seaweed explored by Sue Corr here.
And then I was inspired by seaweed in the work-in-progress below. 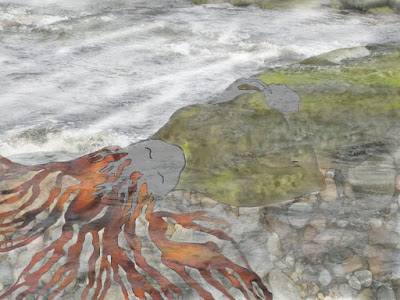 A fascinating read in black and white 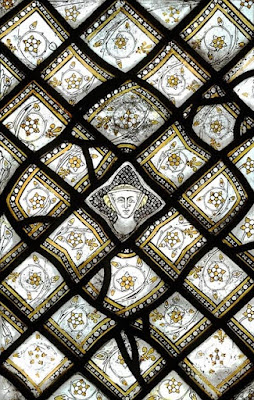 Today I finished reading Monochrome: Painting in Black and White, the catalogue of the exhibition currently on at the National Gallery in London.  I completed the book in two long sittings - it was a real page-turner for me, full of interesting history, and giving me a thought-provoking perspective on monochrome work right up to the present day.
I knew as soon as I saw news of the exhibition that the subject is a great one, but I never felt any urge to see the show.  I was simply keen to read the book.  And indeed the catalogue is full of essential images which are not in the exhibition. I certainly did not feel the absence of examples of great monochrome art - I can now look those up, and keep my eyes open to look with greater scrutiny, if needed, at works I encounter in future.
The reviews - here, and here, and here - are various, but did not persuade me that I need to go to the exhibition for real.  It was the information, the history, the examples, the comparisons, and the ideas which have excited me.
Posted by Olga Norris at 6:33 pm 2 comments:

Into the Year of the Big Think-over 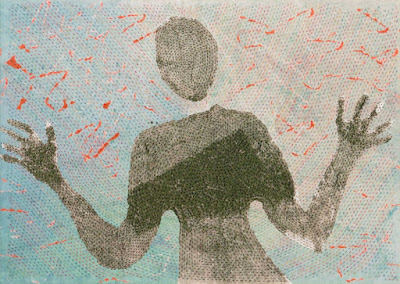 I have reached a point where I feel out of step.  This malaise was emphasised by some irritating hassle in the return of a quilt from the USA, and has precipitated an inclination to throw up my hands in withdrawal.
I certainly do not want to stop creating work - I couldn't anyway without giving up on living.  But I need to take a long look at what I'm doing, and why.
I shall give myself the year - I work so slowly in any case, I have a backlog of ongoing stuff which I do not want to abandon.  (I have expanded a little more in my work blog - but not much, as I'm just at the beginning of my thoughts.) 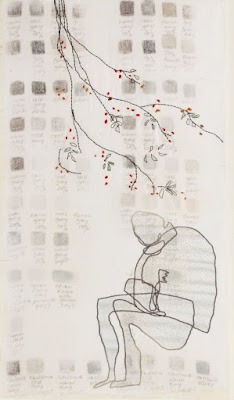 It is not a negative situation, however: one of my favourite activities is thinking!
Posted by Olga Norris at 12:39 pm 4 comments: 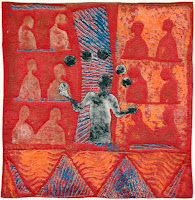 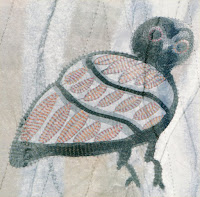